St. Peter’s Anglican church has been a part of the Central River Heights neighbourhood since 1956. Previously a mission of St. George's, Crescentwood, the parish began worshipping in its own space in January 1956. It was officially incorporated in April of the same year. At that time the city of Winnipeg was expanding to the west and the church expanded with it to meet the needs of Anglicans in new neighbourhoods. At the time it’s doors opened, 134 families in River Heights called St. Peter's home.

St. Peter's first church building was a pre-fab Butler building. Five years later, in 1961, a permanent sanctuary was completed and the original building became the parish hall. A focal point of the new sanctuary was a large cross designed by the Rev. Doug Stewart, second rector of St. Peter's. The church's bell tower, attached to the parish hall, was added in 1963. It houses a bell from the Chapel of the Mustard Seed near Matlock, Manitoba. The building as we know it today was completed in 1980, when the centre section was added to join the sanctuary and parish hall and to provide office space and basement meeting rooms.

The design and use of a space says a great deal about the character of a community. There are several ways in which this is reflected in the parish:

Worship is central to the life of St. Peter’s. In spring 2004, after much study, meeting, and prayer, the sanctuary was reconfigured to emphasise the communal nature of worship with Christ in our midst. The altar was brought forward and pews were angled. All aspects of the sanctuary were made accessible to people with mobility challenges. The first service in the new space was held on June 13, 2004.

Hospitality and shared meals are also an important part of life in St. Peter’s. To support this, the kitchen in the parish hall was extensively remodeled to allow for large parish dinners and community events.

In response to the goal to be inclusive and welcoming to all, the physical structure of St. Peter's was made wheelchair accessible and the parish made a commitment to be allergy aware. Members of the parish are asked to refrain from the use of scented products or products containing nuts in public spaces of the building.

In recent years, St. Peter's has developed policies to help limit the environmental impact of activities in the building. For example, we expect all people using the building to refrain from using single use items like paper plates and napkins, and we program thermostats based on building use.

Over the years, parishioners of St. Peter's found many creative ways to break bread together. From Sunday School picnics at Crescent Park to annual meetings that became annual banquets, Shrove Tuesday pancake suppers to Maundy Thursday dinners, the parish family has enjoyed and shared the gift of table fellowship. A parish social evening in 1986 evolved into Pub Nite, a full-scale production with dinner and entertainment that was a feature of the parish for 12 years. Today, table fellowship happens in a variety of ways. Sunday soup lunches are a regular feature and the Maundy Thursday Dinner continues. Fall Suppers have resumed in the parish and events like Bible and Breakfast and Dinner and a Movie involve a shared meal.

St. Peter's has always regarded itself as a community church with an ongoing interest in the surrounding neighbourhood. Over the years a variety of community groups used the building as a meeting space including Y-neighbours, Cubs and Scouts, day care, and Toastmasters. This community focus continues to the present, with an after school program, a local yoga class, community choirs, and a meditation group among the organizations using St. Peter's space.

In the early days, most churches understood mission as something that happened far away. St. Peter’s was no different. The parish was diligent in sending goods and financial support to distant communities. Over the years, the sense of mission widened into outreach that includes support for ministries in the city of Winnipeg and in the global community. Increasingly, this includes establishing relationships and not just giving donations. St. Peter’s has provided support to St. Matthew’s Maryland Community Ministry for more than 20 years. Other outreach has included refugee sponsorship, housing advocacy, and support for Habitat for Humanity.

In its first years, St. Peter’s drew almost all of its congregation from the immediate neighbourhood. As families grew and moved away, that distribution changed, but the sense of community within the parish did not diminish. Today, St. Peter's is home to some 130 families. While it has experienced a certain amount of geographical spread, it still remains very much a community church with a heart for caring for both neighbour and the wider world. 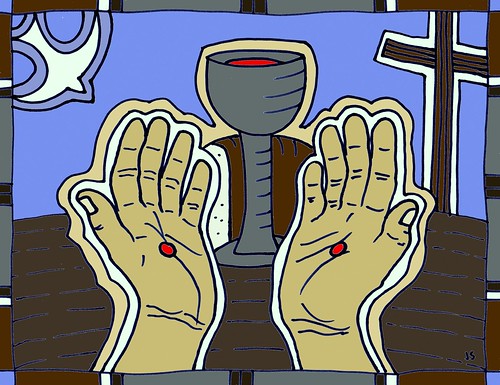 Easter is a Christian celebration of a very important event in the Christian calendar, the Resurrection of our Lord Jesus Christ. After his crucifixion, death, and burial, three days later, He rose from the grave. By this, He conquered death and redeemed us from sin. His resurrection means the eternal life that is granted to all who believe in Him.