Constructed in the form of a circle with a single path, a labyrinth winds purposefully into the centre and out again.  Unlike a maze, there are no dead-ends or choices to be made.  You need only enter and walk the path.

Labyrinths have existed on nearly every continent and in nearly every major culture and religion for over 4,000 years. The earliest known Christian labyrinth was laid in the floor of the basilica at Al-Asnam in Algeria in 324 AD.  The best known is in Chartres Cathedral in France, laid into the stone floor early in the 13th century and still there today.

Renewal of interest in the labyrinth in North America arose in the 1990's. Canon Lauren Artress, of Grace Cathedral in San Francisco, has been key in raising its awareness for our culture and times.  There are now labyrinths in public parks, hospitals, schools, prisons and churches across North America.

Labyrinth walks  are held In September, December, New Year's Day, March, and June to mark specific occasions in the year.

The outdoor labyrinth (facing Elm St.) is available at any time.

All are welcome - whether a first-time or experienced walker . Orientation to the Labyrinth can be arranged by calling the church office. For further information on the labyrinth, contact St Peter's - 204-488-8093 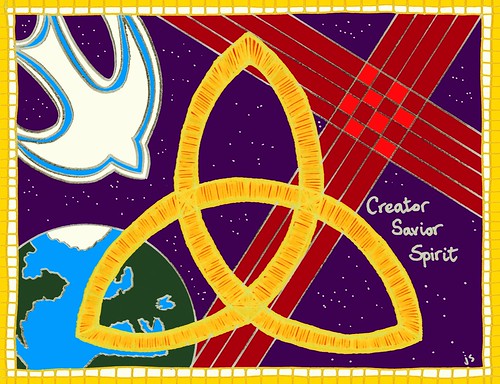 Easter celebrates the resurrection of our Lord Jesus Christ. After his crucifixion, death, and burial, three days later, He rose from the grave. By this, He conquered death and redeemed us from sin. His resurrection means the eternal life that is granted to all who believe in Him. Pentacost is observed on the 50th day from Easter Sunday and celebrates the descent of the Holy Spirit on the disciples of Jesus. Trinity Sunday is the first Sunday after Pentecost to honor the Holy Trinity—the Father, Son and Holy Spirit.